Back at the end of March the BF surprised me with a shiny black fitbit flex – two months on I thought that it would be good to share my experience of this piece of wearable technology. Normally I would jump at new tech but I have a thing about having stuff on my wrists normally. I don’t wear a watch and all of my bracelets are either very baggy or doesn’t wrap under the wrist. At first I was really nervous about having something on my wrist but the BF asked me to try it for a week and see how well I got a long. 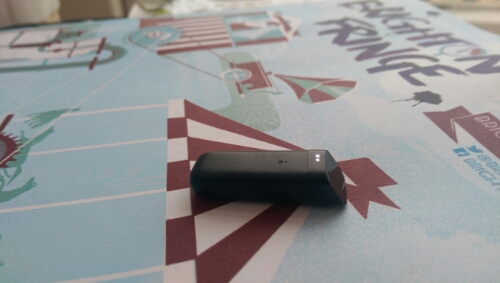 Setting it up was easy – take it out, charge it, register an account online and put it in a wrist band. The actual fit bit is only a little matt finish block of plastic with a glossy end that lights up when you tap it. You can choose to put it in two different sized bracelets and really I should use the smaller one but with my wrist phobia I used the bigger one.

The first few days was really hard – I hated it when I hit my step goal as it would vibrate which was the worst feeling in the world for me. I couldn’t bear sleeping with it and the first two nights I would remove it as I struggled to sleep with it on. It was after 4 days that I changed tact – even though I have little wrists I set the bracelet to its biggest width so that I would push the fitbit up my arm so that it rested on my arm or dangled loosely off my wrist and it worked. Since then I have been able to sleep, run and live with it on and hardly notice. This is when my fitbit experience changed to be really positive. Now I was able to relax and enjoy the benefits of the fitbit than be frustrated with a tightly fitted bracelet.

Now I am able to track my steps, exercise, weight, food, and even sleep. I love the fact that it gives you a goal of trying to do 10,000 steps a day with each light that appears when you tap it representing 2,000 steps that you have done that day. As the fitbit uses bluetooth you can connect it to your phone and use their amazing app. Now I can see graphs of how many steps I have done and when! I think one of my favourite features is the exercise tracking feature that with graph where you have walked, hiked or ran and give you so much detailed information with it. You can see how many calories you burned, distance, pace, splits, steps and even show a map of where you have gone. On top of all of the information that it gathers, you can also set it to give you voice cues of miles or minutes – such a useful feature if you are doing sprint training or trying to reach a certain distance. 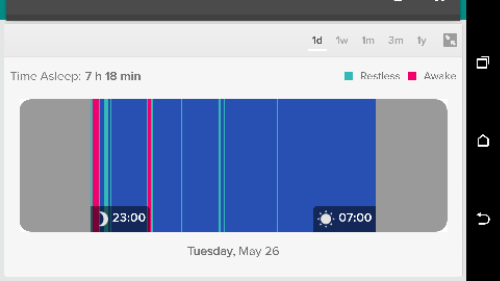 I think that my favourite feature of all is the sleep tracking tool – as you are supposed to wear it all the time it tracks how much you move around at night. You can set it to track that you are going to sleep by tapping constantly for 2-3 seconds (and tapping it again when you wake up), setting the app to start tracking your sleep or add a sleep log in the morning. It is great to see how restless you have been in the night – now I realise why I feel so sluggish some mornings when my sleep graph is a sea of turquoise restlessness on my phone. Since using this feature my sleep has gotten better each week – now most nights I have a great sleep as I have worked out what helps (normally days I have managed 10,000 steps).

Now there are some flaws with the fit bit but the main one is the US only food register for adding food. It is so limited that it took a lot of time to add things on it. There is a fix though – sync your fitbit and myfitnesspal accounts and you can use the amazing UK food bank and its bar code reader system to make it easy. There are also other handy features, like reminders if you haven’t logged a certain meal by a set time only available on myfitnesspal. Fitbit will then get updated with a daily update of the calories eaten so it is not something that you need to do twice. This may seem a fuss but when you other features on Myfitnesspal to register things you will find it works really well. 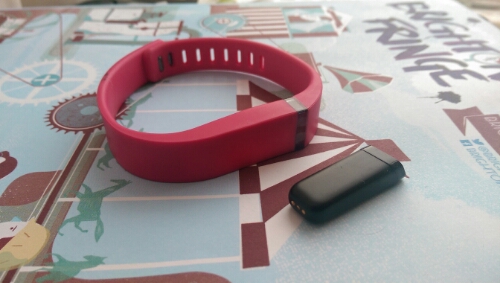 The weight tracking feature on fitbit is not as accurate as the one in myfitnesspal and doesn’t include features like waist/hip/neck sizes. While I love the exercise feature on fitbit, it is limited when it comes to the types of exercise when you compare it to what myfitnesspal offers. I love how these two apps pair so well – it gives you the ability to see similar information in different forms too which can be useful. Fitbit is great at making it easy and simple to understand which is fantastic but as a nerd I love the detail that myfitnesspal gives me.

The design of the device, bracelet and connection devices are very simple – it is clear that they wanted to design a product from start to finish that is sleek, simple and works with everyday life.

Now originally I started with a basic black bracelet – getting a coloured set was so much more expensive as everything comes in your chosen colour. It worked with almost every outfit, as black does, but it is the slick design that makes it perfect for everyday. It doesn’t standout if you don’t want it to. There are option to get decorative ones or in various colours, so you can add your own style to it. 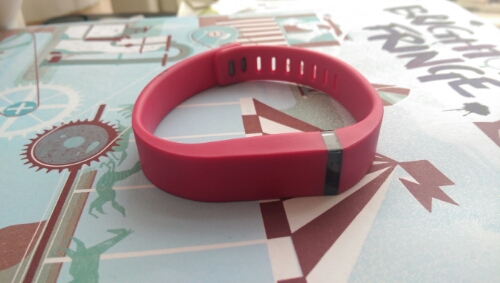 For my birthday I was lucky to get a pink bracelet to go with my black tracker, and  I couldn’t be happier. I loved the black bracelet but I must admit that I love having my own colour. It is easy to identify whose is whose if we need to take them off and I love the dash of colour.

Two months on I still look at least once a day to how many steps I have taken – whether by tapping on the top to see a general idea from the lights, opening the app or from the widget on the front screen of my phone. I know how good (or bad) my sleep is and get track my exercise and calories to a very accurate degree.

It has felt like I have made any changes since using my fitbit I have lost 5lbs and now fit into a dress I haven’t been able to in 2 years. The fact that you can accurately compare calorie in take vs calories burned means that I now make decisions I otherwise would have ignored. I also find that I walk more and can walk longer without feeling tired or stiff.

While any wearable technology could do this, it is the app, games, and simple design that make this so effective as a piece of smart technology that has helped me get healthier. If you are not a numbers nerd you will probably adore the app (and won’t need myfitnesspal) but the compatibility of this to other apps makes it incredible. I even have my fitbit attached to my IFTTT account!

For me it is a 9/10 overall – it is a great design both physically and as an app – I just wish that they had a UK food system.

If you are thinking of getting some smart tech, check out fitbit‘s website – there is a number of different types and accessories. I have the flex and would recommend it if you want something for everyday.

Do you have any smart wearable tech? What do you think of the fitbit flex? What apps or tech do you suggest for healthy living? I would love to hear from you so leave me a comment below!

I enjoyed reading this whilst wearing my new Fitbit Charge which just arrived today. I’ve been using it for about 6 months and the band just fell apart, but luckily customer service were really good at replacing it quickly. I am SO much more active than before I started using it. Great device.

Flashsticks – the good the bad and the ugly review