Flashsticks – the good the bad and the ugly review

A few months ago I tried to learn 120 BSL signs in a just 30 days and I am proud to say that not only did I manage but that a lot of it has stayed with me. 100 of these signs I learn from using the ingenious new Flashsticks and these are the ones that have stuck the most down the line – it does help though when your house is still covered in these gentle reminders on smart little post-it notes all about the flat.

Basically, if you aren’t aware of them, Flashsticks have a BSL word in an easy to understand visual and written manner however if you still need a bit of help you can scan the post-it with their app to get a video of the sign in question.

I suck at learn languages because of my dyslexia yet BSL due to the physical nature of it is a lot easier for me – Flashsticks made it possible though to learn even better as I could do so in the manner that best suited me. It was fantastic – in a month I had managed to learn over a hundred signs and those using these cool post-it notes were by far the easiest!

Mid August they announced that they were updating the app – which while it looked a little clunky did the job. It was great to see the ability to do more with the notes scattered around the house or not have to go and hunt them down for a reminder as they stayed on my phone in a sort of history. I even tried their new object scanning feature and I was utterly amazed – I really could just scan objects around the house and get a very good translation of it into various languages. Unfortunately BSL is currently not in the object scanning database so with all my 100 words already under my belt I haven’t touched it for a while. 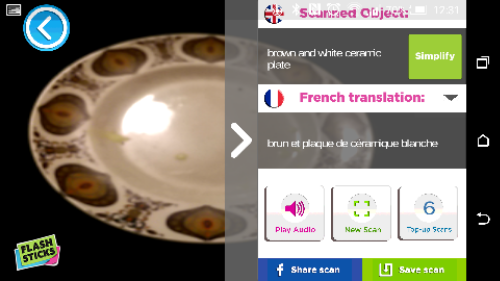 It really is impressive – everything I have tried seems to be on there and it gives you a really detailed description which you can then simplify! This is the best thing I have seen in a language app and could prove to be a vital tool for general tourists as well as those who want to learn a language. Using the new app, you are also only limited to a small number of object scans before you have to get a subscription. With the massive list of languages on there, this really is fantastic.

Today I picked it back up and decided that I would try to use their “learning journeys” feature and was dismayed to find that the BSL option is still missing. Never mind I thought and tried my hand at trying French as it would still be the same experience and would give me an idea of just what I could look forward to in the future.

This is the part that if you are a Flashstick fan you may want to turn away as this is where it gets ugly – basically it boils down to if you are dyslexic this app is not for you. 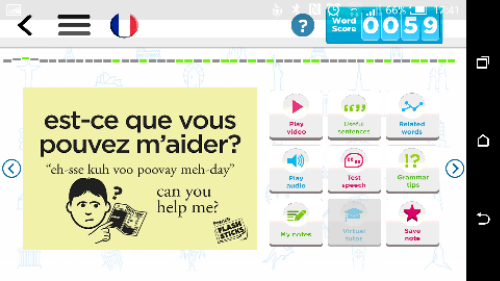 First off I try to go through the set cards that I would be covering only to find that I get full blown sentences rather than basics like “hello”, “Goodbye” and “how are you?” – this was a little overwhelming as I straight away it is very off putting. If you plan to learn a language the very basics are where you should start to then slowly build confidence yet the first thing I was supposed to learn was “Est-ce que vous pouvez m’aider?”and this was just the start of a downward spiral. When learning BSL the videos were vital to see what the physical actions required were – with french they are pointless – they don’t add much as they rip the audio for the audio button below it.

Next up the buttons – you press it get a little click and then a few seconds were you aren’t sure if you have pressed the button. The number of times I got “Est-ce… Est-ce…Est-ce…” before I just realised I’d have to wait to see if it was successful than have something that feels like a flowing experience. My biggest issue was the stupid speed at which the phase or word was said – I could hardly catch how to pronounce it and the gobbledygook at the bottom of how to say it was no use when your learning difficulty makes reading new words so hard. It didn’t help me learn anything new as I couldn’t work out what was being said. Add to the sudden change in translator and quality for a number of words and you just get a shoddy learning experience that makes you struggle to wonder how such a bad learning experience could be connected to such a good physical product.

And finally before we leave the learning words section – the fonts! If you want to look up more information about a word such as useful sentences, grammar tips or related words, they have chosen a font that I just can not read. It is so narrow and squashed that letters in some places merge together – not great if you’re not great with new words anyway to be trying to learn grammar from a font difficult to read. 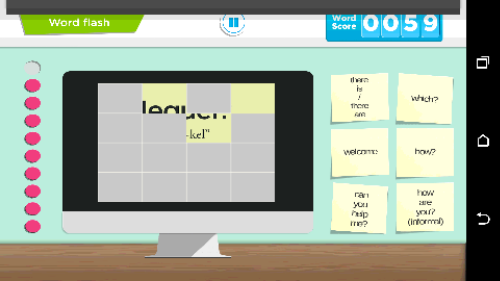 Games have been proven to be highly successful at helping improve performance, efficiency and learning, so it was no surprise that that added a number of games to do that. To get the next lot of words you have to get at least 25 words correct in a game. This would be great if they weren’t so badly put together and aimed towards making life hell for people with dyslexia – I really am convinced that the game designer decided “How can we make learning a language even harder for people with reading difficulties?” and designed two games around that concept.

At the moment there are two games – a catch phase style of making you try to guess what word it is based on only a few squares of the French or English part of the Flashstick and provide a number of options to choose from and put this to a apocalypse style music style count down that rushes past. When you don’t have enough time to read the options let along try to work out what the hell the card could be in the foreboding count down it is not going to be a fun, enjoyable or productive learning experience. This was just stressful and I am ashamed to say I almost threw my phone – something I never do – because of the terrible nature of this game. I love Catch Phase so you can imagine just how insanely bad this has been set up. 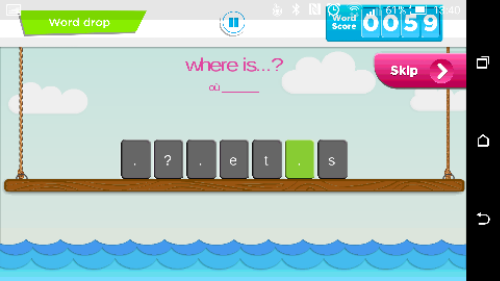 Next up is the only other game that they have live and its all to do with spelling – yet another blockade for people with dyslexia… and surprise surprise but it was set to another foreboding style count down of the words descending the screen to drown in water. Spelling at speed with just randomised letters slowly moving – this game designer is mad and in my opinion should be fired. Not only did I have no clue that I had to drag letters around till I worked out what the hell the spelling was, it took me a bit to realise of how the letter moved when you drag them. After getting almost all the letters to go green I would drag another letter through only to have to reshuffle everything again. I will admit that I took no notice of the letters trying to shuffle them around until I got some green ones so the game wasn’t even helping me learn anything new or prove that I had learn anything new! The interface as whole of this game is terrible – when after you have completed a word that due to the long dragged our worrying wait that you press skip you find it has given you an incorrect for the next word… you can start to see that this has either been just poorly designed or rushed in an ET game style manner that if I could I would bury all versions of this game in a pit in the desert if I could…

The only good thing about this particular game was however due to my pattern making skills able to allow me to get enough stars to get more words but my french is no better because of it. In fact when you finally get enough stars for more words it doesn’t actually tell you or make it clear how to get to these. I had to completely close the app and reopen it to find out that the words were in a new section! This whole section of the app just has fault after fault after fault and as someone who has used a lot of complex apps with no issues you can imagine just how much of a train wreck that it is.

It is clear that the app has been broken into two parts – the scanning objects and post-it notes section that have done an incredible job and the learning journey section who should all be fired for such a brand and product destroying end result.

I don’t think that the “learning journey” team had any testers that were dyslexic – this aspect of the app is everything to do with why I have struggled to learn languages in the past and it just makes you upset, angry and now has degraded my previously glowing review of Flashsticks. My only hope is that they realise their mistake and either split apart the two aspects or get a much better “learning journey” section created. Annoyingly you have one of the best language learning tools of all time next to the worst app (section) of all time – I wish I had never tried the Learning Journey now as just stuck to scanning objects around my flat.

Overview
The Good: The object scanning – it really is impressive and would be worth the £2.29 a month subscription if you want to learn a language
The Bad: See the ugly…
The Ugly: The Learning Journey section as a whole – just avoid this unless you want to check out the worst language learning app in existence.

I love Twitter – it is a hub of information, news and cultural commentary. It is ever changing in what everyone is talking about, trending or following – this is why I adore it. There Read more…