So already we are at the end of March 2015 and it has been an exciting month. Finally my new website is live, I have been to a number of wonderful events (which the reviews for will be up shortly) and I have been out exploring the world with my camera. As it is second anniversary of the photo blogging challenge run by a Lilhoohaa, the theme for this month was ‘Two’.

Now this may seem a pretty straight forward theme at first as I could just take two of the same item and photograph them but I wanted to to really explore how I could mix my love of storytelling and photography together. There was also the terrible news that my favourite (and main lens) for my camera decided to die after 5 amazing years so I have been left with the challenge of using my camera phone instead. as someone who has been able for years to completely control everything it was really hard relying on just a point-and-click like camera for once! 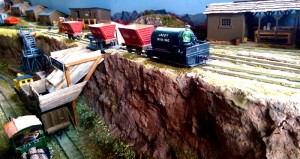 When it comes to my Grandad there are two things I remember, trains and Jazz. My Grandad is an award winning Train modeler and so I grew up sitting and watching him create beautiful scenes in his workshop with Jazz playing softly in the background. Now that he is having to care for my Nan, he no longer gets to send his time working away so is selling his trains. On my visit to Bournemouth, to celebrate my sister’s birthday and Mothers Day, I got to see his last collection of trains before he sold them off to a specialist collector. All of his engines are always numbers and named so here is his last number 2 engine.

While he has said that he will create more set for family members, it is a sad time for me as I always had such fond memories of sitting and talking to him in there. 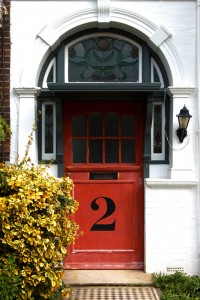 This month I have started walking cutie the cute bundle of fluff called Otto. While he may be a dog named after the German for eight, it is walking to him through the back streets of Brighton that I get to come across lots of amazing . While it may be very expensive to try and buy a house in Brighton, it is always fun day dreaming or window shopping for a place of our own.

The first place that caught my eye was an incredible house with a vivid red door and massive black two painted on. Often it is so hard to find the house numbers so there is clearly a story behind the colour and size of the number. Maybe it is missing post, or just wanting to stand out, whatever the story though I love the mystery surrounding the vivid nature of their door. 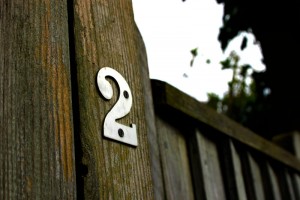 Following this very strong display of numbering a house, ten houses down from Otto’s front door is the reverse – a delightfully subtle yet pretty number by someone’s front gate. Not only is it high up but you only see it purposefully looking for it or from the glint off it’s metal surface. While there is not as much mystery behind the number, there is the mystery of what lies beyond the gate – what does the home look like and who lives there.

I love both of these pictures but the designer in my adored the fonts used for both. At one point I considered doing the whole series based on house numbers as there were so many different numbers and styles used. Out of all of them though these two were my favourite. It might be the style of font, or that wood is my favourite material and red is my favourite colour but mainly I think it is because of the stories behind these two.

It did make me question how much we say about ourselves from our doors. I know that  mine says very little as I am renting so the ability to change anything is non-existent but I can’t wait till I do own my own place and what impression it will give others walking by.

2015 has been an exciting year for me, with a new website, business venture and lots of networking event but it has also been the first time exhibiting my business at an event. On the 28th April I had the great opportunity to exhibit at Sussex Page’s Prestige Event at Hurstpoint College. For the last month I have been running their Twitter account for them so throughout the event I was taking photos for myself and for their social. It was just after I arrived that I realised that there in paper was a perfect representation of this month’s theme – despite being the organisers, Sussex Pages had set themselves as table 2.

Here was a great chance for me to share in this month’s photo blog a key moment for me – exhibiting me and my business for the first time. While this photo doesn’t capture the excitement of the day, the links made with other local business owners, it means so much personally. This had to be one of my least favourite photos all month in terms of appearence but sentimentally I love what it means. It is funny how often that happens really – the photos that bring people to tears aren’t often the best looking but those attached to a great memory or somewhere, someone or something. 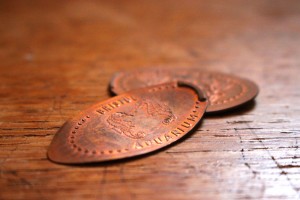 For my last photo, I decided to go away from the typography and look at what a two year anniversary was to me. For me it is two squashed coins, each one from an anniversary trip with my other half. It now seems to be our tradition to track down a coin squashing machine and I couldn’t resist to share the first two. While there may not be any typography on the front of these coins, the story and meaning is so powerful to me – here is the representation of two years of a happiness.

While there were other two’s that popped up through the month, these are the ones that danced on my mind or heart the most rather than the photos that came out best. I know that this sounds insnae but often when it comes to photos or anniversaries it is more about the senitments and love behind these things than something that just looks beautiful but with no meaning behind it.

I would love to hear what two means to you, or what your favourite photos have been this month?

Check out all the other photo blogs for this month’s themes at LilHoohaa’s blog now!

I love how you shared the stories behind them.

Wishing you & your business great success!

Thank you Danielle! I do love stories behind pictures – to me some of the most treasured photos are those that don’t look pretty but hold some wonderful memory!

lovely stories and definitely add so much to the pictures, I love that too.

Thanks Sarah 🙂 I always find when you know the meaning behind them it makes them so much better!

This is such a fun idea for a photography challenge, I love how different all of your photos are, very creative!
Good luck with your business, hope all goes well for you 🙂

Lovely photos and lovely stories to go with them!
Thank you for linking up with the #WeekendBlogHop

My original plan was to go with typography. I changed gears but I’m glad someone did it.