It is the end of a leap month so what more a fitting photography challenge for February than “leap”. After last months exciting announcement, I wasn’t expecting this month to be as exciting but boy was I wrong!

Through the years I have done a lot of event photography, covering everything from dance shows, charity gardening events to BMX displays. I have always loved capturing moments of action and delight. Managing to capture a perfect dance leap or free runner leap has always been my favourite photographical challenges.

At first I had no idea what I was going to be able to photograph that would fit leap as I was trying to think about the leap year rather than a form of jump. It was only after taking a friend’s dog for a walk that I realised I was missing the completely obvious leap. Within a week of February I ended up with all of my photos!

On a windy February afternoon I ventured out to Brighton beach with the aim to capture the waves leaping, dogs jumping and the hope of finding the sometimes present skaters. Within 10 minutes I came across a guy on a skate board carrying a hefty camera patiently waiting for something. Quickly I realised he was waiting for the wind to settle so his friend could try a trick over the stairs.

Patiently I waited too but time and time again the stunt was pulled at the last minute. After 15 minutes though he took the risk and flew over the steps and bars leading down to the seafront.

While he didn’t manage to land his trick it was still impressive to see him try and attempt this impressive leap. I loved how this photo came out as you can see the level on concentration across his face as he tried to complete his trick. 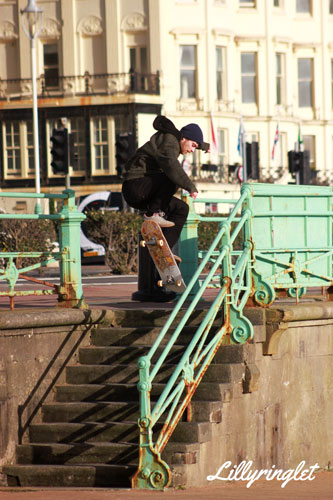 As I had waited other skaters with cameras had stopped for a brief chat before flying off down the concourse – Having waited so long just for one leap and the wind nipping at my ears I ventured down towards the piers to see if I could catch up and capture their jumps along the quiet beach. I was so glad when I finally did find them trying lots tricks which I later found out was them warming up. 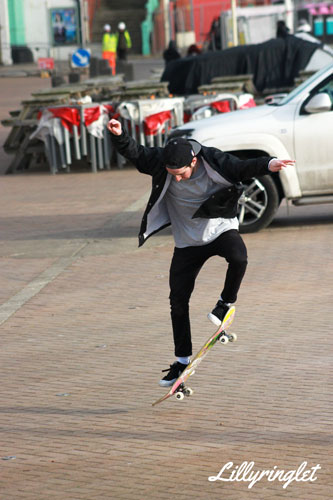 At first all of their tricks and leaps were just off the ground or over objects on the floor. For me it was really interesting – these guys with just a board and the ground still managed to pull off such a range of different tricks, leaps and styles that I ended up watching more than I photographed.

Soon though their tricks involved leaping up and over concrete seating into a paved pit. The results were hit and miss – sometimes the board would get caught leaving just the skater leaping forward but towards the end they were planting trick after trick dropping down a couple of foot successfully. It really was incredible to see these guys slowly building up their confidence and tricks. 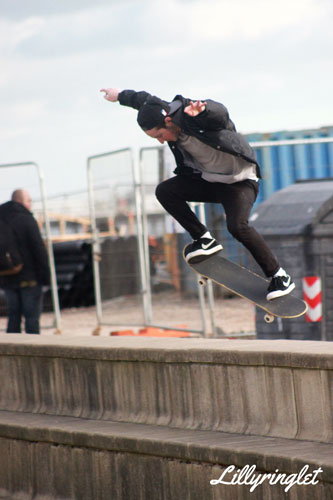 Fully warmed up they disappeared further down the beach and I turned home with my ears feeling the cold air. Walking back I was happy to find the original two skaters were taking a rest and checking footage. When I asked how it was going they were really open – he still hadn’t managed as it was a new trick and direction that he was trying and the windy conditions were causing a problem. After a few minutes of talking, and having seen my other photos of his unsuccessful leap, he asked if I wanted to see the easier version of the trick he was trying to photograph it.

How could I refuse! He was incredible and his trick resulted in my favourite photo of the day. After seeing the photo he was impressed too and opened up about more events and places I could capture more skaters. It was fantastic to hear all about their industry, including insights and politics I would otherwise not have known. 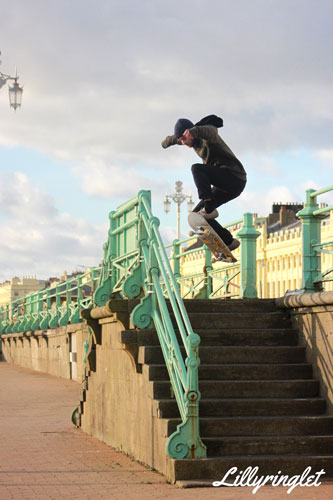 Two days later I was out with my camera again, though this time I was not alone. Walking a long the seafront with a friend and her dog I was really lucky to capture her dog Otto and others leaping around and playing. He chased after footballs, jumped off steps but out of all the photos my favourite was him playing with another dog. They leapt after a ball together, while their fur whipped around them and ears waved around. 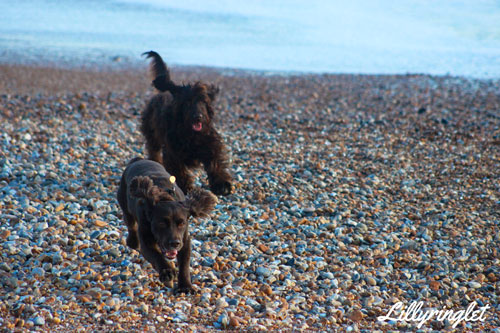 I must admit that these are not some of my best leap photos of all time but I am so glad that I took these. I learnt more from the conversations or moments than I did about photography. Sometimes though to get the best photos it is not just about technique but learning about the world around you. I can’t wait to take more leaps and jumps now – it really did kick start my addiction again that normally only rears it head when all the summer events start.

What is your favourite photo? What leap photo have you taken that you like? Have you photographed skaters performing tricks? What leap photography hints or tips do you have? I would love to hear from you so leave a comment below!

I love the stories that went with the photos, of course I did like the photos as well 🙂

Awwwww thanks! I do love a good story it seems!

Sometimes though to get the best photos it is not just about technique but learning about the world around you. That is a wonderful mindset. The leaps your captured speak to an amazing ability and I’m happy you captured them and enjoyed the bonus of meeting new people. As nice as those shots are, my fave is the puppers on the beach!

My favourite is the dogs too – I love anything cute and fluffy!

I learnt this mindset years ago when I was photographing my mum horse riding for the first time – I had beautifully composed photos that I thought really made her look amazing. Turns out she wasn’t as pleased because the house didn’t look great and that is all that matters apparently. Turns out different sports, industries and demographics all look for something very different in terms of what would be a good photo. That conversation with my mum was very early on in my photography so it really helped me realise to always ask and learn as it would lead to much better photography.

It takes a leap of faith to hang around strangers and photograph something brand new to you. I really enjoyed reading about your experiences while you worked on this month’s photo set.

Thanks – I really do love to learn new things so I’ve learnt from experience talking to people, especially about something they are passionate about almost always leads to interesting and useful information.

What a great set of photos for the leap theme. Using the skateboarders was perfect. It really does lend to some cool and interesting photography. I like how you got the shots, especially by keeping faces in the shots. It’s kind of crazy the risks these guys take when performing skateboarding tricks, isn’t it?

Thanks! I really did enjoy taking these though it was scary sometimes – with the risks they took I was surprised no one hurt themselves!

A few weeks ago I got some really bad family news – someone in my family had passed away suddenly in the night. I often turn to photography when faced with bad news so I took my Read more…