Recently I have joined a monthly photo challenge group to experiment with different themes. January’s theme was Games so I grabbed my camera and starting taking lots of photos. The idea is to take 5 or more photos base around the theme and to then write and share about the photos that you took throughout that month on the theme.

I love games and always have. Whether it is a board game, computer game or even a simple word game, I have found them have a key place in my heart so it was a great theme for my first challenge.

First of my challenge started over the festive period, still celebrating the start of a new year. Often around Christmas and new year is the time when families come together and play new games and even in my childhood I have fond memories of my dad trying to beat How wants to be a Millionaire, or the infamous debate to whether my nan’s answer counted because she didn’t say “bing” or “bong” before her answer. I even remember unwrapping a big box one year with my sister of the brand new gladiators game, the only present we both remember from that year.

This year was no different, but this time it was playing games with the BF’s family rather than my own. During a game of “the logo game” I couldn’t resist taking photographs but this one was my overall favourite. 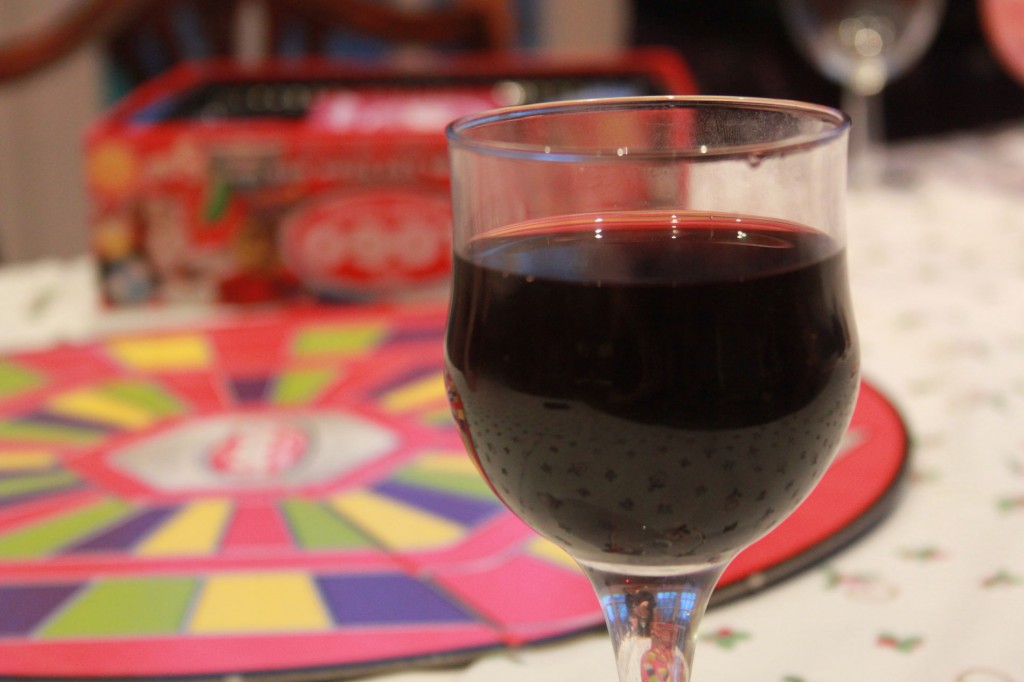 When it comes to social games, whether they are board, card or word based, often there is food and beverages also present. This often results in the additional challenge of overcoming any alcohol induced limitation for adults or the all ages hurdle of trying to play games without knocking over any drinks. This in its self often feels like a game in its own right.

Games are not only played though in just our homes – arcades are present up and down the country. As a seaside city, Brighton has a wealth of arcade games; though most are mainly on the Palace Pier.

On a frost bitten morning, I went for a stroll along the seafront; making my way into the weekday half empty arcade near the front of pier so that I could have fun taking photos of games outside of my house. There is after all only so many photos of computers and board games that anyone can take and I wanted to see how much I could push myself and my camera. 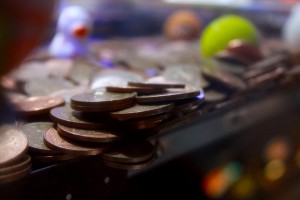 Walking into the first dome on the pier, coin machines seem to be everywhere, with coins tittering on the edge tempting you to play. How the coins seemed stacked so high and far over the edge is fascinating but also infuriating for those hoping to make some extra pennies.

For me, capturing this seemed the best way to capture a machine as this is often what you look at before you start to play or whether any new coins have fallen. It seems to beg the question – would you have played this machine with so many coins stacked so high and far out?

Visiting one of the arcades was exciting with an array of different coloured lights flashing everywhere, and all the machines taking on a different shape or look – yet many down the middle were the same game. 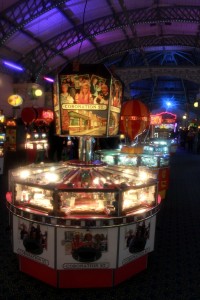 Here you can see the row of machines, all of the same game but in a different package. Walking down the middle of the arcade it seemed hard to find a different type of game; but stray to the edges and you would find a barrage of different games all with their own game play or interface.

While I took a number of other photos, these two still remained my favourite at what seems to be the main focus of this arcade – to get you to spend some coins in the hope that you don’t realise how much money you have spent.

A week later we were lucky to have a light pattering of snow one morning, a sight I have hardly seen since I left living in London. The cold air and snow seemed to repel away the normal throng of parents with their kids in the park so the park felt empty for once with no games being played or sounds of joy echoing around the gardens as it normally does. 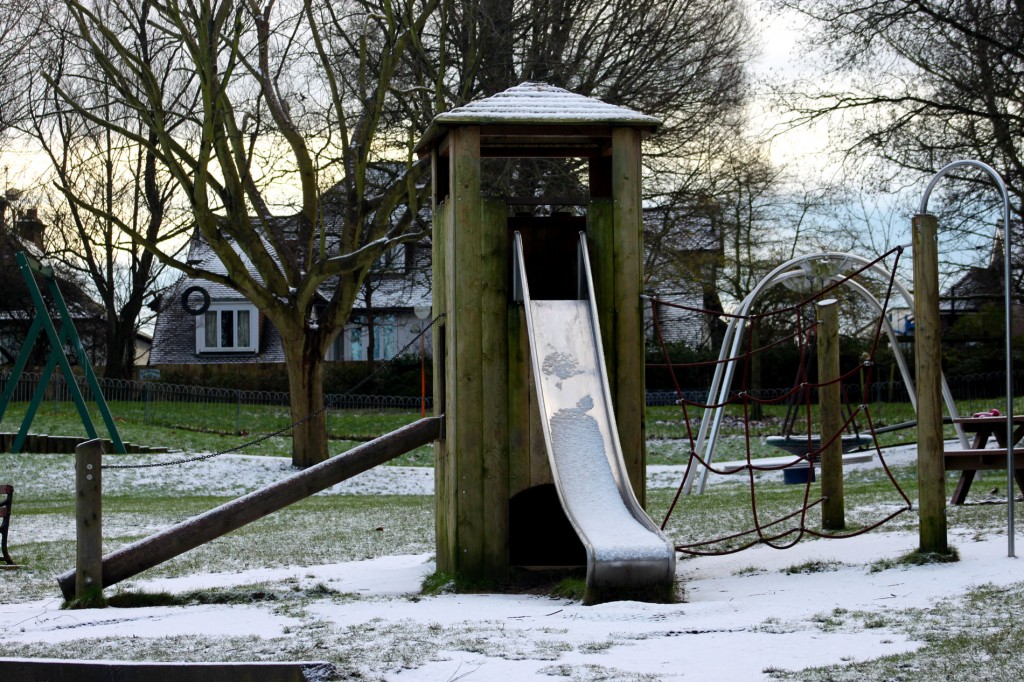 While I took a number of pictures that morning, of people  and animals playing in the snow, the most apparent photos for me to share when it came to games is what places built for games and fun are like when no one is around. How different an appearance that they take on seems cold and bizarre even with the equipment brightly painted.

Most days, whether a weekday or weekend, there are kids flying down this slide but with the snow untouched it is apparent no squeals of delight or games of snowball fights have occurred. 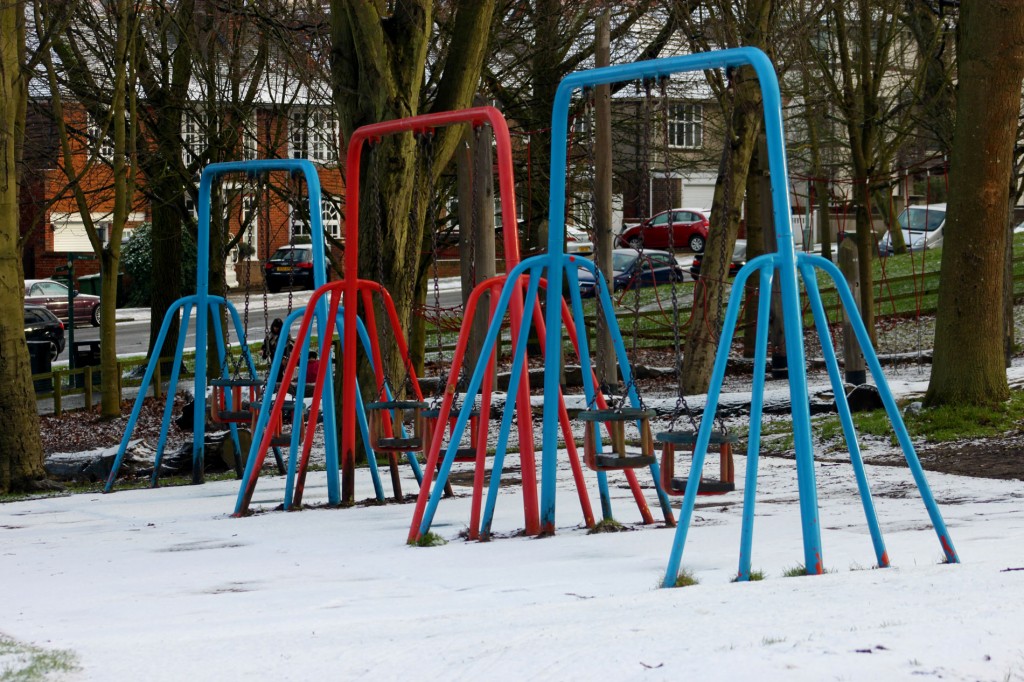 The ground around the swings didn’t even bare any footprints to them and even as I took this photo, I could even hear the squeals of a young child wanting to fly on them despite the cold.

That snowy day showed that without games or fun, some places utterly change in how they appear. If you imagine a park, even with snow, you probably would think of kids running around playing games, rather than the stillness that the snow had brought.

Games are great and a world without them would be a dark place. They make learning fun, life enjoyable and often act as a great way to break the ice with family, friends and colleagues.

Are you taking part in this month’s photo challenge – I would love to see what photos you have taken!

I really like the third shot of all the machines in a row. The lighting and colors are cool! 🙂

Thanks PJ! As I said in the blog, that photo was one of my favourites from visiting the arcade. The lights in there are great and I love to avoid using a flash as much as possible when I am out and about as you can get amazing lighting you would otherwise miss

I think the five photos you chose are excellent for the theme. The top one is cool with the wine being more of the focal piece and the depth of field on the game.

The outdoor playground shots are nice and make me think about how it will look when the weather is warmer.

My favorite is the coin ones. I find those old arcades are an amazing place for photos (I visited one a few years ago and took shots mainly with my iPhone in there and loved it… would love to go back with my main equipment some day). The coin shot is really wild though… and gives you the feeling of wondering if the coins fell with the next person or not.

Thanks! I hoped that they would be good 🙂

I love that too – if I go now will someone else reap all the rewards of those pennies I put in!

I do love how an empty playground makes you think more of how full and exciting it will be in the summer more often than anything. It is fun doing a photo to try and capture that feeling.

Thanks for the opportunity to do a little armchair traveling outside North America. I spent a few minutes thinking about your empty playground photographs and comparing some of the equipment with the slide and swing structures in our part of the world – they are designed and made a little differently, but they’re all about fun – and the playgrounds around here are mostly empty this time of year, too!

Your photo of the teetering pennies is my favourite, making me a little nostalgic for the Canadian pennny which was phased out a few years back.

Thanks! I actually know someone who designs playgrounds for around the world and it is interesting how designs will differ based on age, country and laws in place. It just seems to be snow, a rare occurrence in Brighton, that deters parents from going to the park.

Oh no! I didn’t know that they had stopped using them – we used to find them in all the fundraising buckets all the time as people used to (and failed often) to get away with paying for things at the bar with them. We were happy though as we made a load of money as we got to many so could get them exchanged for free and the money would go to great causes.

My kids would certainly be drawn to the coins teetering on the edge! I was just drawn to the photo. Very nice!

Oh, I look forward to the day when our playgrounds are once again filled with kids. We’ve gone a couple of times this winter when the temperatures have gotten over 35, but it’s just not the same.

I love your unusual take on the prompt. I laughed at your first selection, and really love the perspective of the coin shot.