It is 1st August and that can only mean one thing – it is Brighton Pride and the start of my new “a month of” challenge. Throughout all of August I am going to try and learn at least 4 signs a day for the whole month.

I have really struggled with how many I should aim for but as I am going to use Flashsticks to learn these new signs I thought that 4 each day would be a good plan. This is because the post-it note style learning tool comes in 4 stacks so it will be easy to manage.

So why is BSL the choice of my next a month of challenge. It basically is a very long story starting when I was in year 11 when for the last week of school we were taught how to say good morning and the alphabet in BSL. At camp in the same summer we were also taught a song’s chorus in BSL and a a bible verse by our tent leader. It was wonderful as it made the chorus and verse so easy to remember (I still remember the song now because of that!)

Me and my friends used to sign the alphabet front and back while we were bored in assemblies and attempted to gossip in very very broken sign language. It was our way to get around the no talking rule and also stave off the terrible boredom as we waited for the whole school to file in to the hall to the same music every week. Those happy memories of sign stuck with me and we often heard stories of how many girls had to learn it to talk to family members.

When it came to my A-levels, signing slipped as most of my friends were prefects so had to sit on the stage leaving me to drifting away in thought. In my first year at university there was no one else interested in signing and no sign language society so again it slipped away.

It was only in my placement year that it came up again – in fact it came up on my first day working for disability charity MERU. We had to learn in the afternoon how to communicate to those with limited sight, hearing or cognitive capabilities and part of that was being able to sign “Sorry but I can’t sign”. It came up that some of the engineers had learnt basic sign language so that they could ask questions to the kids. At the charity there was even someone who had a qualification in BSL so that they could talk to them. That year I had to use that handy phrase so often as we would go to disability events and people would often sign at me.

After graduating I was lucky to work at a Student Union managing student groups. One student approached me with an application to start a sign language group to teach others basic BSL. She was rather shocked when my first question was if I could join! Luckily staff could and a week later her group was up and running with a classroom full of staff and students who wanted to also learn. For many staff there they wanted to be able to communicate to deaf students, and most of the students were studying social care, nursing or other topics where this could be an incredible useful skill.

I got to learn some incredibly useful signs for 3 months – I even taught some of them to friends, such has how to order drinks for when we were out. Students who were on the course would come in and gossip in BSL with all of the other SU staff looking on confused. It was so useful and I found myself and friend using it so often and we only knew a tiny number of signs. We could though have conversations about drinks, dancing and relations all in a noisy nightclub or without others knowing what we were talking about.

I still today will sign “what” to people often causing people to look at me just as confused. BF knows certain words now too as they creep in when I get excited, its loud or just because it is easier. When we were in Barcelona we would sign to each other from across the carriage about when we were getting off or how we were feeling.

When Flashsticks were giving bloggers the chance to review their BSL line I jumped at the chance – now I will be able to learn more BSL and in a new exciting way! I could not contain my excitement when they came back and told me they were sending me some. They arrived back early July and it has been so hard not to pick them up and have a look – I knew that I would just go “just one more… I’ll have enough for my challenge!” and I wouldn’t. 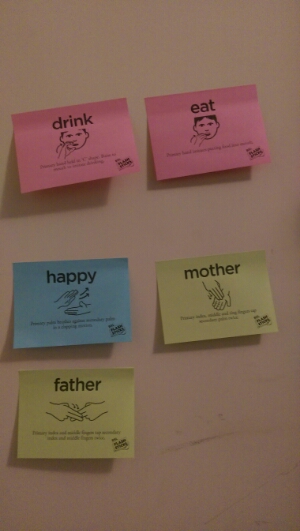 So now it is August and I can start! So I’ve downloaded the app and I’m going to learn my 4 signs for today. As I have done some before I will not include those I remember already as my 4, so this will be interesting to see how much I actually remember.

I will be asking BF to test me (hopefully he won’t be too busy to do it!) so I won’t be surprised if he picks up some more signs too. It should be a fun challenge – after last months impacting so many aspects of my life I am so glad that I planned for this one to follow now!

Already I have found that on the first day there are 5 that I already know – these are mother, father, happy. eat, drink and happy. This means that today’s words are start, sad, hospital and teacher. Now I knew teacher but a with all languages there are often different variations of words. For teacher in Dorset you do the sign from your head rather than chin like the flashstick app shows. I know that I have covered sad before but I only remember happy from wishing people a Merry Christmas and a happy new year every December.

Already I love the app – it is great to see someone actually doing the sign as the drawings are sometimes not completely clear. I have only used the scan bit but it is still have a while to explore the rest of the app. The notes are awesome – I love how you can stick them on to anything to help you remember these words. I can put things like eat and drink in the kitchen, and hospital on a doctors letter. I love this so much though I am not sure how much BF will be happy with all the sticky notes around the house…

So day one seems easy enough – I do only have 4 new signs to remember though. As this goes on it is going to get harder and harder as it goes on, especially if there are days like today were there are 5 words I apparently still remember!

Please note that I am reviewing Flashsticks and have only received the product to do so – this means that all of my opinions are true and my own.

Day 20 – the importance of learning styles

I have not been using Flashsticks for 6 days now and it is hard. I know that what I am doing is relearning signs now from 5 years ago but without the ability to get Read more…

I am over the 10 day stage and tomorrow I’ll have over 50 signs to remember! Keeping all 47 current signs is starting to be challenging. Not only is the difficulty coming from the large Read more…