Day 20 – the importance of learning styles

I have not been using Flashsticks for 6 days now and it is hard.

I know that what I am doing is relearning signs now from 5 years ago but without the ability to get a video of the sign it is much harder. I also miss not having them around the house so I don’t have those nice little reminders throughout the day.
Learning a language is hard, especially on your own, so it is best to choose a style that suits you. I think this is why those signs that me and BF have to talk about I now always remember. Talking has always been such a great way to learn things – that is why classes were discussion was involved were my strongest subjects. I excelled at History for my GCSE’s because the teacher realised that we needed to be able to defend or “discuss” various points in an exam and doing that in a fun and open conversation was the best way to do this. The same was for Religious Education and despite having to learn a lot about two religions that were not my own (I did Islam and Judaism) I managed to get an A without any revision. 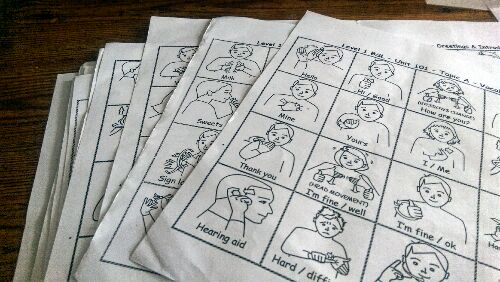 5 years ago when I was learning sign language in Bournemouth, it was not an accredited course but a student who wanted to help increase those who knew the basics. The course was full of staff, like my self, and students who all wanted to learn it for varying reasons. For many it was to help them with their job – whether that was a current role to talk to students, or something that would help students in the care or tourist industry later on in life. Others were there due to an general interest in language, to talk to family members or in one case to be able to chat up a girl.

We had two students who had known sign language all their lives leading the classes; one had a father who was a translator and the other had a brother who was deaf. While they lead the classes with lots of talking and discussion, they were always very open with just how strict all of their classes had been – in sign language classes there is normally no talking what so ever. For me this would be terrible – I am best learning vocal words with the sign or paired with a funny story or way to remember various signs. I would love to go back to classes but I know that I would struggle in such a strict environment.

In the past I have tried to learn words to French, Italian and Spanish songs for my grade 6 and 7 singing exams. It was always so difficult and my singing teacher found it a struggle as I never had an issue at the technical songs that he would send my way. I have tried again with another teacher who tried a different approach – she would make funny jokes or stories to make these random sounds make sense. It took so much longer yet it did work – compared to before where it would take 6 months to learn a song in another language I was able to pick up one in less than a month! Learning style does really make a difference and this month covering two different styles has really highlighted this.

Tomorrow I will go back to using Flashsticks again – and I am not ashamed to say that I will not miss trying to learn it off the old vocabulary sheets (even though I have learnt them all before). I have lost a lot of the drive and guidance that I had using flash sticks. As I would pull off the word and stick it around the house as well as the handy list of the back that I had a clear indication of what I had covered. It was easier for BF to get involved and easier for him to test me on that days words and passed ones covered. Now he has to file through the flash sticks list and piles of paper – it is not as fun or easy so he is not as inspired to take part.

As I am now passed the halfway point and I only have 11 days left that remembering all of these words are buzzing around my head. There are many now ingrained but keeping all of them in seems to be difficult – I am not sure if this is because of the different learning style or the vast number of signs covering. I am actually tempted to feel like it is more about the learning style.

The last 6 days have been such a vivid reminder of how important it is to learn in a way that suits you best. Hopefully when I go back to flashsticks tomorrow that I will have the fun time at the start of this challenge with BF getting more involved in the challenge again.

Do you have a preferred learning style? Do you have a tip on learning signs or languages? Do you struggle with learning new languages – have you given up or have you found a trick that helps you? I would love to hear from you so leave a comment below.

Please note that I am not being paid by flash sticks and all of this is my own opinion. They have only provided me with a set of their beginners BSL flash sticks set after I approached them concerning this project with the plan to review them at the end of the month – this is what I plan to do at the end of the challenge.

I am over the 10 day stage and tomorrow I’ll have over 50 signs to remember! Keeping all 47 current signs is starting to be challenging. Not only is the difficulty coming from the large Read more…

As anyone who followed last month’s challenge will know, the biggest struggle of last month was blogging everyday. It seems it has continued in a similar vain this month for similar and very different reasons. Read more…