I love the pregnancy yoga classes LushTums run so when I found out that they had an afternoon class that was all about getting you prepared for birth class I jumped at the chance to attend.

As the course runs for only an afternoon it is only covering birth but as this is the part that was scaring me the most, I was happy to spend the money with an instructor that I trusted. I also was made aware that the preparing for birth class would help make partners aware of key positions or breathing exercises covered by the yoga classes regularly so BF would know what to suggest or help with on the big day.

Normally I go to the Hove lessons so I can leave 5 minutes before the class starts and still be on time. This course was held at Bird Studios behind the station so me and BF had to get up and get a bus across town. I was feeling so ill that BF kept asking “Are you sure you want to go – will you be well enough?” Nope I was going – not only had we already paid for the class, this was the last course that I could attend due to other arrangements before my due date so it was now or never. I wanted to go to this course that it didn’t matter – I was freaking out about labour so needed this.

On top of feeling really ill it turns out that there was a lot of extra traffic with some sort of parade or something so when we arrived we were 10 minutes late and couldn’t find out where to go. The lobby was full of ladies chatting away and no receptionist – we had no idea where we had to go. Luckily we went to go looking for someone to ask and I recognised my yoga instructor through the window. We were there and hadn’t missed anything as they had just done some basic introductions two minutes before hand as they waited to see if we arrived.

Just like the yoga lessons, there were mats set out on the floor with bolsters, blocks and blankets. Bags, shoes and coats were put in the corner on some chairs and we sat down on the floor. I was quick to straddle the bolster as I knew how comfortable it was for my back, hip and bump. 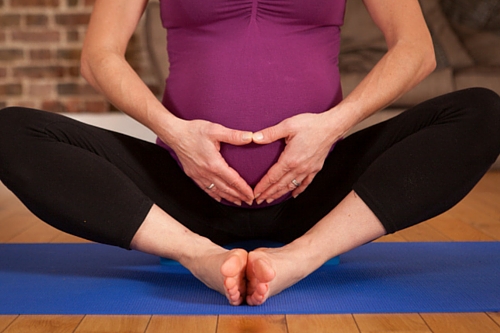 There were only three couples in total there – I was half expecting to have to face double that especially with how big, oversubscribed and overcrowded the Saturday yoga classes were. It was a great thing though – we could ask very specific questions and the session was tailored to what we needed or wanted. The first couple were having their second baby at home and were open to share about their very quick (4 hours!!!) and easy labour, while the second included a writer from “Call the midwife” also due with their first baby!

I have read a lot – I find knowledge is a great way of calming down so I love to absorb information so that I am not caught off guard. BF is the same – I really did choose the perfect man for me it seems. After hearing about how much went wrong when I was born for years, labour really scared me so I needed to find out as much as possible and how to stop being ripped to shreds like my mum.

With introductions done, Claire and the midwife running the session started with breaking down the information. It is clear that they have really planned out a great structure and course as they had a flip chart ready with detailed drawings in a set order. While was a key direction to when things were covered they were really flexible and would answer questions when they came up. With such a small class size, they were constantly asking for what we already knew or thought – it was a great approach as I learn so much better with this sort of discussion type learning than just having to listen (especially without the ability to write notes throughout).

Constantly through the session I was learning more and more but more importantly I was finding out the level of improvements and changes in recent years that will stop what happened to my mum happening to me. The writer from “call the midwife” while very knowledgeable on a lot of things was still constantly exclaiming how little she knew compared to the two instructors, especially when it came to modern technology or procedures.

I think one of my favourite things about it being run by Claire from Lushtums is that she knows how important it is to get pregnant ladies up and moving, or giving  them regular breaks. If I wasn’t struggling from so many food aversions I would have been able to happily eat an array of drinks and biscuits – they really do think about everything on this course.

As someone who thrives on knowledge that comes from a clear scientific proven basis, this course was fantastic. I had been worried that it may have been a bit too earth mother that it would put off BF yet it was the opposite. Everything discussed and talked about was routed in studies and research. It really helped BF see why the pregnancy yoga lessons that I had been going to were helping so much in the pregnancy and would help when it came to the birth. For me this was definitely one of the best things that came out so since he has encouraged me to continue practicing at home and even uses some of the massage techniques and positions to help me since. As the only one who was currently going to classes, Claire was really great at teaching the others key moves and techniques to everyone, while also offering new positions or techniques that I could do with BF or improve those I already knew.

The mix of knowledge and practical was perfect – I left feeling so much more prepared, supported and better yet no where near as nervous about labour. BF came away feeling really positive about the course – yes a lot of it he already knew because of researching so much but he had learnt things too, which is rare, particularly concerning practical help and support that he could give me. Now when I talked about doing a figure of 8 or the yoga breathing, he knew straight away what I was talking about; now when my hip or back hurts he puts his hand right where it will help thanks to the course. The fact that he complimented the course is huge – when it comes to feedback on things either he is vocal about how bad it is, or will say it is ok. He doesn’t compliment things often so I can only see that as an outstanding success that he found it helpful.

I would recommend this birth class for any pregnant couples – it really was amazing and my fear of labour has gone down so significantly, while I feel so very prepared for what expect before, during and after. If you are nervous about giving birth, this for me is a must – it covers everything you need to know, is tailored to you and your partner but will also be taught in such a clear, practical and useful manner. I would see if there is a course near you as Lushtums is expanding across the country.

Have you been to a birthing class? Did you find it helpful? I would love to hear about your experiences and stories so leave a comment below!

All of this is my own thoughts and opinions – Lushtums were only made aware that this review after the blog post was written.