I am officially passed the “bump or burrito” stage of pregnancy but now I’m facing the infamous twins question instead!

In November I found out I was pregnant. The same week I got the two lines on a pee stick I also started counselling from Headway after months of waiting concerning my brain injury related depression. It was sad but due to a change in circumstances the councilor had to stop the sessions with everyone and felt that with the pregnancy helping my TBI and the progress that I had made that she was not worried about them coming to an end.

Every week I would turn up and talk to the receptionist of the church it was held. She had been so sweet and wonderful every time I would be patiently waiting for my counselling to start. Sadly in my final week she was off ill so the pastor had taken over instead. With my normal chat companion not there I sat on my phone as I waited.

Now I know I have passed that baby or burrito stage as I have been asked “when I was due” by a few people now. I have a clear bump and am officially passed the halfway mark – I’ve given up trying to hide it away now too as it just made me feel flumpy. 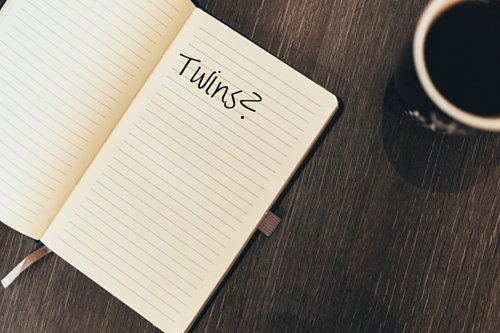 There is a mother and baby group at the church that starts around the same time as my weekly sessions that the lobby is full of prams. Every week the receptionist would have the keep a keen eye to stop mothers blocking up emergency exits and access to the offices (including where my sessions were held). The pastor not used to the mayhem realised too late and managed to edge out of the office door me and my big bump would have to waddle through soon to increase the access.

I’m sorry to say that I had my head in my phone while he was doing all this so jumped when he quietly asked “So when are you due?”

His faces dropped and a look of shock crossed his face – something I haven’t actually seen when I have talked about my due date before.

“Are you having twins then!” He almost exclaimed.

“Nope – I’m only 24 weeks pregnant with a little girl.” It wasn’t until I had replied that I realised just how big I must seem then. I did explain though about the history of twins in my family so we had made sure at both ultrasounds as my nan never knew (this was though before ultrasounds).

He seemed really sweet and I think even embarrassed with his response. Another member of staff had snorted at disbelief at his question and shortly after I was called to my session I overheard her telling him how rude he was for implying I was having twins due to the size of my bump.

Since getting pregnant I have heard so many stories from ladies online all about bump shaming that they have faced – whether too big or too small it seems every lady has a bump size shaming story. The majority seem to be more about bumps being too big – it doesn’t help that the media doesn’t share pictures of ladies who are over 7 months pregnant. Recently there has been a lot of heat from the pregnancy community about the tiny size of the bumps in labour or at 9 months in films like Mad Max – they argue that the ladies bumps were all so small that it makes normal bumps at 8-9 months seem crazy big.

I think I was quite lucky; the pastor wasn’t rude just a little shocked that I had a bump that big and I was only 24 weeks. I am only 24 weeks though so I might face my own fair share of bump shaming now that it is obvious I’m pregnant and not fat. I will probably face the “Twins???” question again so hopefully I will be able to laugh it off.

Have you been bump size shamed? Have you been asked if you have had twins? Do you think  bumps are conveyed as too small in the media? I would love to hear from you so leave a comment below!