This week I had the joys of finding out how busy trains and pregnant ladies do not mix.

A few months ago I was asked to run a training session at the Korana Centre on Social Media. I love helping people understand and learn more about social media to help their business or charity so I was so excited. As someone who does not drive this did however involve having to travel via train and bus to get out to Ardlington.

The trip out was easy – I was travelling out in the middle of day with an hour stop out in Haywards Heath where I hid out in a pub grabbing food while talking to a family about video games. It was amazing to take the bus that wound through the countryside and not feel at all ill, dizzy or headachy – this bump is doing wonders for my brain injury.

Stepping off the bus I headed to the Korana Centre and helped set up the session before people slowly started to arrive. I have taught to larger and smaller groups but the nerves of running a training session always hit me – I don’t think I will ever not be nervous as I worry about whether or not I will give the best session for everyone. The session though was a huge success with lots of people afterwards telling me how I had either helped them finally understand the importance of social media, helping them get out of a marketing rut, or in providing lots of great ideas for their business to post on social media. Everyone at the session was so sweet, caring and lovely that I really hope to go back one day – one lady even gave me a lift back to the station so that I wouldn’t have to wait for the bus. If it didn’t take about 2 hours door to door I would definitely go to their weekly sessions as the next few sounded so exciting so if you are based in Sussex it is worth checking them out. 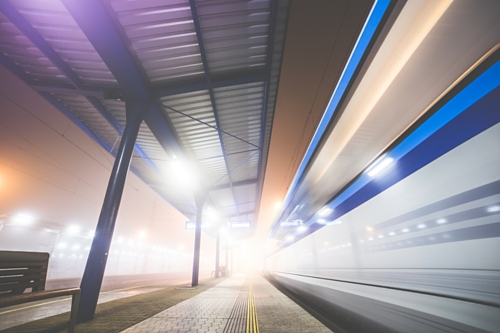 Now I haven’t had to take the train much over the last year and a half, and if I did have to take the train any where it was never during the rush hour. As the session had ended at 6pm and I arrived at the station at 6.20, I managed to get a very busy commuter train with cancelled trains before and after it… it was therefore very busy! I managed to get on the train but as it was so busy I managed to get to hold a pole just because I had a bump – if I had been pusher I may have been able to get a seat. Being pregnant I could have probably convinced someone to give up their seat but I was just so happy to get on the train, hold on to a pole and not feel ill. The people around me were also so sweet and it was fun to talk about work and life as the countryside wizzed by.

Everything was fine and then the train suddenly jolted and three people around me tried to catch me and support me as much as possible even asking if I was ok. At the time I thought nothing of it – I only had a little bit of pain in one of my ribs and an achey hand but that changed. A couple of times people tried to squash my bump but the wonderful people around me helped to stop this happening – I really am thankful for those three people who took the effort to look after the short little pregnant lady on the train. By the time I got home a rib on my right was hurting. The next day it was far worse – I seem to have hurt myself and the pain at times was unbearable. The next few days this has continued – I don’t think this is going to be going away any time soon.

When you are pregnant the hormones flowing do crazy things, including making injuring your self far easier… and with no access to painkiller far more painful too. That’s right I am stuck with a painful rib and nothing but paracetamol and warm baths to help the pain.

If you are pregnant, get a seat. It is far too easy to injure yourself and it isn’t until afterwards that you find out how painful it can be. Get a seat, get a “baby on board” badge and be stubborn that you need a seat. Hopefully other ladies can learn from my mistake and get a seat so they don’t get hurt.

Do you have travel horror stories while pregnant? Have you had to demand a seat? Do you have stories of commuters helping or going the extra mile? I would love to hear from you so leave a comment below!