Ultrasounds are always exciting – this was the second and possibly last one that we would get. This second ultrasound, as it was planned at 20 weeks could also tell us what the gender of our little baby was going to be.

Still struggling with all the itching and being made aware that it could be a serious pregnancy condition I was very nervous. Little one hadn’t moved for a while and movements haven’t gotten regular yet so I was panicking of what I may or may not see at the ultrasound.

For weeks we have been discussing whether or not we wanted to know the gender. There are so many pros and cons to both sides and even the morning of our appointment we still weren’t sure what our decision would be. For us the idea of keeping it a secret would be exciting and would stop people from giving us overly pink or blue presents. Find out though would let us be able to focus the baby name search down significantly and we would be able to stop calling our little one an “it” or go “he/she” in every conversation; we would also be able to start imaging our little family.

With the afternoon starting we made our way by bus straight to the hospital with bottle of water to drink. As at the last ultrasound I had been instructed to have a full bladder, I thought this would be the same so throughout our journey I was sipping away. By the time we got to  the hospital though I really needed to pee – seems my bit of a bump is squishing my insides.

As we arrived the room was almost full of others. Next to the only free places to sit together were a rather loud family. Last time we had an ultrasound we had decided to get lots of photos so that we could share them with family members – this time round we had decided on just one or two. There was only one issue with our plan – that loud family had broken the machine and now it was no longer accepting card payments. Having used the last of his change on the bus tickets, BF was left with nothing to pay. Everyone else waiting in the room had this issue – many partners had run off to get change but I managed to pull together some change so we could get one photo and BF wouldn’t have to run off.

The time passed and sat quietly whispering away in excitement – unlike our first appointment our appointment time came and went by. 15 minutes after it was scheduled I couldn’t hold it any longer – I needed to pee and someone prodding my stomach with an ultrasound wand was out of the question unless it was going to happen in the next 3 minutes. It was then and only then that I checked my paperwork and phone only to find that at the 20 week ultrasound I didn’t need a full bladder. Thank goodness!

With that I nipped to the loo and less than a minute after returning to my seat and feeling far more comfortable my name was called out. This was it, we were going to see our little one again. All of those fears bubbled up one last time. “Please oh please let there be a heart beat and that everything is fine!” rang through my head as I was asked to get up on the bed.

Up went my top and on went the gel that warmed up really quickly as it touched my stomach. This time I was at the hands of a new girl with a more experienced lady assisting her. The wand went on my stomach in a hard prodding fashion. Instantly they found the baby again in a peaceful pose. It was this point that BF exclaimed “It’s an alien!” to help calm my nerves as I gripped his hand to make me giggle. The giggling clearly woke up the little baby as it began to wiggle and move. The newbie then annoyed at the now awake baby prodded harder and harder as she tried to find a good position to view the heart. After a few minutes of the other lady trying to guide her and I think seeing how much pain she was clearly inflicting on me and bump, who was wiggling with every hard prod, she took over. She excused it as “I’ll show you what I mean and you can try later on to find it yourself” but she was so gentle and asking constantly if she was hurting me.

They spent ages looking over the heart and checking out all the key veins and arteries running to and from it to have me and BF geeking out in the corner over it all. We are nerds so love finding out all about this sort of stuff and so got to learn a long side the newbie where everything was. It also meant that we had even longer to coo and see the little alien slowly calming down back to sleep again as bump was no longer woken by laughs or painful prods.

Bit by bit we got to see them checking the spine, vital organs, head, brain and hands. My favourite part was when the screen was all black apart for two little perfect feet occasionally moving. It felt like we have been gifted with so much time to see every little detail of our little one as the new girl got to learn so much. 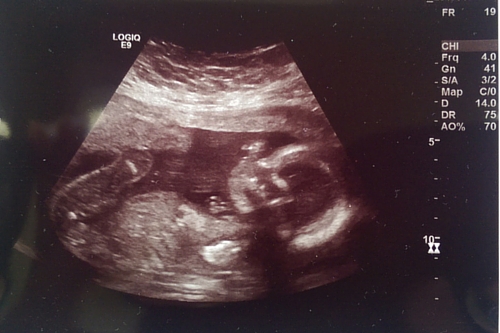 Again throughout there was talk of measurements passed and written down while Bf held my hand and we cooed away. It was a much longer appointment compared to our first one that a new lot of gel had to be applied. With all the measurements and learning that could be gleamed from our session the lady holding the wand told us that all the vital stuff was finished and did we want to know the gender.

We still hadn’t formalised an answer between us but in the thrill of it all we looked at each other and bf said “I know she really wants to know so yes.”

She giggled at us – I think she has been faced with many answers of over her years of doing this and I think she always loved this part. “Any ideas or predictions of what you think you might have?” she quipped leading on to BF giving a very quick break down of his family just having boys for the last 5 or 6 generations so it is probably going to be a boy.

“Well I have a surprise for you… it’s a girl!” Cue to very shocked parents to be – we really thought it was a signed and done deal with BF’s family history but here we had news of a little girls. It seems my recent dreams of holding a little girl were true! It was at this point I turned to BF to see one of the biggest and proudest grins from him I have ever seen as he squeezed my hand. We didn’t get long left to coo over our little girl as a final picture was taken and my stomach was cleaned up of left over gel before dashing to the loo one last time. By the time I had returned the picture was printed and the ladies were offering their final congratulations before we headed back out the hospital to go home.

As we caught the bus home we were both buzzing with excitement – it was clear that the news of the gender made this even more real for BF. I don’t think he ever imagined having a little girl either so a new sort of shocked excitement was waving over him. BF had gone from wanting to not know or anyone to know to sharing it with the world. It would seem that we made the best choice and all the way home we giggled to each other and tried to think of baby girl names with our new photo in hand.

What was your 20 week scan like? Did you want to know the gender? Were you surprised? I would love to hear all about your stories so please leave a comment below!