So it has not been long since we have found out and this week I’ve had the crazy task of trying to keep the pregnancy a secret. 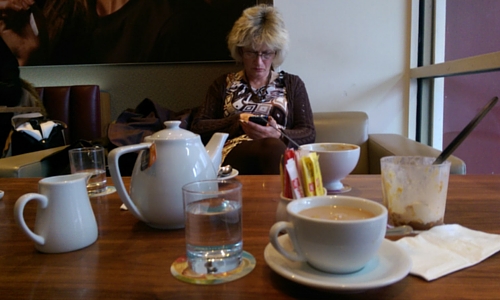 Despite struggling with food and morning sickness, managed to go to the Hagen Daaz cafe with my Mum

This week my mother is coming to visit for 2 nights with most of the time based in London so see an opera. The last few years my health has not been great but even in such a short time since getting preggers my head stuff has gotten so much better! We are trying to play it off as a change in diet (though that is just pregnancy foods to avoid and nausea from others), change in medication, lots of rest and all the nero-physio work.

I really thought with all the morning sickness,  exhaustion, obvious pregnancy foods to avoid and the nose of a Bassatte Hound that it was going to be really obvious. Turns out that walking helped the morning sickness and I had been smart enough to pack small packs of crackers to nibble on when it did kick in under the guise of just being hungry. 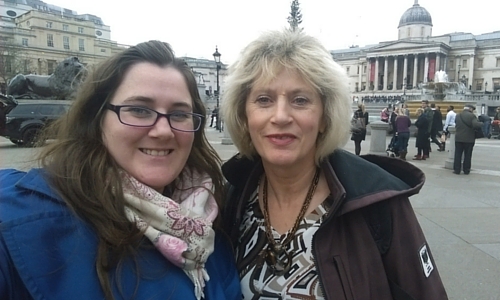 In London with my Mum; little did she know that I was pregnant!

I must say it was hard not grinning from ear to ear about our little secret – OH would sneak a bump kiss when she wasn’t in the room and we kept talk about bump to a bare minimum via the phone in case she saw the message some how. When we did have to talk about it, it was coded to sound like it was a month visit instead.

Ironically this tactic also turned out to explain my need for trips to the loo… and a lot of the other little symptoms that I hadn’t thought about as I’d been so worried about the constant nausea. Need the loo… is because of Aunt Urma’s monthly visit, foods taste stronger… is because of Urma, constantly being hungry… is because of Urma! It turns out that other than bigger boobs and nausea I could put everything down to the monthly visit I wasn’t going to have for a long time. Seems that those two being so close in symptoms was useful for something.

So did she know after wards – not at all! My sister, who was told to help keep it a secret until Christmas, was able to give an update on how little she suspected that she was going to be a Grandmother.

The trip was a double success though – despite having a growing bump and dating my OH for 4 years, none of our family have ever met. The opera trip wasn’t just a lone trip with me and my mum but organised by OH’s grandmother. Not only did some of our family meet for the first time but no one found out from either family unless they had been let into our secret before. For me it was my sister but for OH it was his uncle whose the same age as my sister.

So what are my tips for helping to keep it a secret from those big family occasions:

Do you have tips for keeping yours a secret? I would love to hear them so leave  a comment below!