We have the all clear! After our first ultrasound scan and blood test last week we got the all clear – we can spread the word to everyone now!

Months ago we decided that once we got the all clear that we would spread the news that we had a baby on the way. We hadn’t decided how to do this – we were always too worried about if something was wrong. Now with the news at hand that everything was fine, in fact the chances of key issues were very low, that we could spread the news about our coming bundle of joy.

At first it was all about telling key people before the news spread like wildfire – this mainly was for BF telling people he managed or close friends. I will admit I wasn’t really sure how to bring up the news – I’ve never been good at jokes or being quick-witted like BF so for me it was awkward as I brought it up.

I don’t think that it helped that as someone unmarried and only recently engaged, while being a Christian, it was shocking news to many until they found out why we had to go for different order of milestones. With the pregnancy as something that might be soon impossible to us, kids being something we had always wanted and it helping my head injury issues, often it led into an in-depth discussion about health issues normally not raised… even when announcing a pregnancy. I told a very select few, including a very talented friend of mine who I asked for some advice on how to announce this exciting news. Straight away he was trying to think of ideas and quipped “if I can’t think of something just right by tomorrow, I’ll draw you something instead!” – as someone who loves his humour and his drawings this was a win-win.

BF had his own way of spreading news to his friends with “Do you want to see a picture of a naked person?” to differing responses. To one friend it was “only if there is a penis!” before seeing the picture and squealing with delight, while the other looked confused for a moment before working out that it was going to be an ultrasound and gasped “is she pregnant!”

Yes I wish I had the wit of BF – I am pretty sure it would have been a much funnier and easier way to tell people but at least I know now for the future; either use that or ask BF what he would do!

Ironically I did tell my best friend in a similar way back when we first found out with a simple message of “I got two lines!” only to be shocked when I got the response of “me too!” Turns out we were three days apart until she lost her two weeks later.

Keeping to his word, my very talented friend came back with a sketch and an apology – he had kept his word, as he couldn’t think of an idea that I could Photoshop or photograph that would be nerdy, funny and well perfect, he had started one. It was perfect – it had me and BF playing video games and an empty space with “Player three press start!” and an arrow pointing to it.

The next day or so was back and forth of changes, colour, final pen work and additional added touches like the hand sewn baby trousers I made BF for Christmas or the mugs of tea to show off my tea addiction. As each version came through it was just better and better every time. BF loved it – it was very much us in every way in how he had captured us and the choice of items around us. 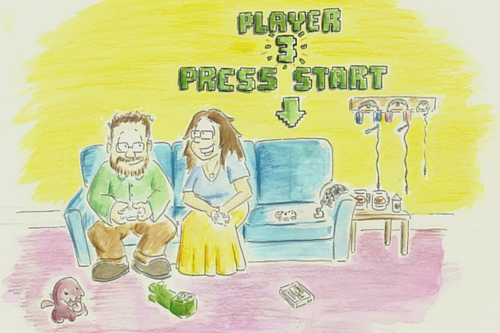 Finally he sent through the final image to upload and share. It really was prefect – I don’t think I could have ever designed a more perfect way to announce the baby – it was slightly cryptic (which BF loves doing with announcements), nerdy, and very much us in every way. There had been discussions of what to put with it but BF and I decided to keep it simple and add to the mystery, say nothing at all and just tag BF in the picture.

As soon as I had the final image, I posted it and at first there was nothing. People obviously saw the image and thought it was just some nerdy reference that couldn’t understand or a picture that was cute but scrolled quickly past. Once one of BF’s family left a comment about being excited to be a Great Uncle the bomb dropped – soon the comments and likes didn’t stop as more and more people put things together and worked out that it was a nerdy way to announce a baby.

I am not going to lie – if I had to tell all my friends one by one without the use of the internet I am not sure how I would have managed. Sharing this sort of news online feels so much better to me. After the few awkward conversations a head of this of telling people before this went live, I probably wouldn’t have told a lot of people as it was just so weird. To me it was a “Hey I’ve definitely been under the sheets with BF and now I have something to prove it!” than a “Hey I’m going to be a mum” one. I know it is just me being weird but being able to have a nerdy, cool and sweet image that I’ll get to remember for years to come is so much better.

I’ve found out since that my friend is going to give us the original artwork too! I already told him I owed him a few beers but now I’ll have something special to put on the wall of the nursery until they are old enough to come and join us for games (by how the drawing has been created it works even when the baby has arrived). I really don’t know how I’ll be able to thank him now – it really does make me happy every time I see it and now I’ll never forget when we shared with the world about our exciting bundle of joy.

How did you spread the news? Did you share the news online or tell people personally? Did you prefer telling people yourself or online? What are you planning to do to share your baby news? I’d love to hear about how your stories so leave a comment below!

What a lovely way to announce! Congratulations 🙂 #MaternityMondays

I love your style of announcement. We told my parents via a Christmas card with a picture of the scan. #MaternityMondays

aww that is lovely. With number 2 I wrote it on a chalk board ‘I’m going to be a big sister’ and took a pic with my little girl. There are some really great ideas out there. Thanks for linking up #MaternityMondays

That is such a cute idea! You are right there are so many great ideas out there. 🙂

What a great way to announce your pregnancy in style, we weren’t on social media when we were expecting our first two so it was just a few phone calls and texts, with our third I wrote a blog post announcement and spread the word that way. #maternitymondays

Thanks! I know many friends on social media who told me how much they just wanted to tell people in person and have all the excitement of it. When we found out the gender I couldn’t even manage that over the phone so my partner had to tell them! The blog post is a really good way – must be nice having it always there as a reminder of that big moment.

This is such a sweet announcement! Congratulations! I will keep up with your diary, thank you for sharing your experience!

Aw congratulations – I love the picture, just like Tom Fletcher’s announcement – so cool!!
With my 2nd, I ordered a t-shirt with ‘I’m going to be a BIG BROTHER August 2014’ and took a snap of my eldest wearing it!
Then when we were in Paris we posted it on social media 🙂 #binkylinky

Congratulations! I just rang friends and family. I’m not sure j put anything online tbh! Thanks for linking up to the #BinkyLinky