In the US, Baby showers are common place but that isn’t the case so much in the UK. They do still happen and are a great way to celebrate before the baby arrives.

I knew early on that I wanted a baby shower. For me it was nothing to do with gifts or silly games but a chance to celebrate and see friends before the baby arrives. With my health issues making travel and catching up with friends often difficult, an excuse to get lots of friends together was something I couldn’t turn down.

My best friend took on the challenge to take on this rarely seen in the UK celebration and knew that I just wanted a chance to see people with no drama. This made her job a lot easier in one way – she just had to plan a nice relaxed day of food, games and gossiping. The only issues would be keeping the drama to a minimum with my family.

In the end, she invited just my mum and sister and a few girls from different parts of my life all with the idea of a small and calm gathering. I only knew a couple of things – the date that she had this small gathering, that there would be a picnic in the park behind my flat, a few hours were I would get a nap before finishing the whole thing with some board games.

Friday morning she turned up and we gossiped before shopping for some picnic food. Once home, rested and fed, we turned to the kitchen and began to make Lemon Pie. With my food aversion to cake, this was planned to be the replacement as I knew I could eat it and not feel sick. It was so nice to be in the kitchen baking again – my friend was able to help with all the things, like taking things in and out of the oven, that I struggled with these days from pregnancy. It was such a nice day of catching up, baking and just chilling out.

Saturday morning rolls around and we get up to do some last minute chatting and tidying. Now the plan for the day is that while the picnic would start at 12, me and my friend would start to head around 11-11.30 to save a nice spot under a tree before anyone turned up.

At 10.30am the phone goes and it is my mum and sister – they were 20 minutes away and coming to my baby shower! Sure enough and 20 minutes later and they had arrived. My friend disappeared down with a car permit – it was a good thing she did as they had so many gift bags and presents that they needed help getting things back up stairs to my flat! I couldn’t believe how many beautiful and wonderful things that they had brought from my family!

There were three gift bags and two baby towers of items – my sofa was taken over by all these wonderful and thoughtful items. My sister was so excited that about all the gifts that she had picked out from herself and others that before we could leave for  the park, I had to unwrap it all. It seems me and my sister have something in common – we love giving people gifts and can’t wait for them to open them.

They had been so thoughtful too that almost all of the items were not pink but neutral colours with a clear Winnie the Pooh theme coming through. I couldn’t believe how sweet all of this was! On top of all the adorable clothes I had a lot of useful items, like baby blankets, creams, nappies and much more – my mum and her side of the family had really put some thought into what to get me.

With all the presents unwrapped, we gathered all the picnic items and headed to the park. It was a beautiful morning so when we arrived it was great to find that no one had yet settled under one of the trees. Blankets and food quickly were laid out and soon my phone was going as people had made their way into Brighton and to the park. One by one friends arrived, each one bringing food that was added the growing picnic.

I can’t believe how perfect this was – I was surrounded by great friends, food and talk in a beautiful setting. For me this was exactly what I had always wanted. The only downside of the picnic was having to get up and down to greet people with my bump and my legs occasionally going numb. 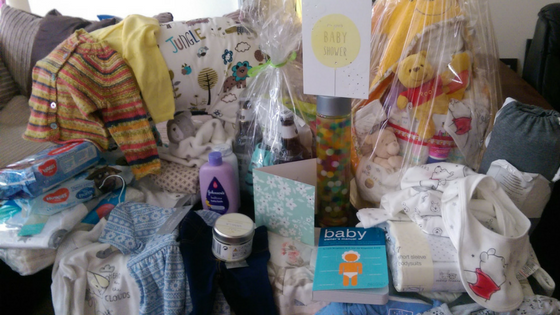 My mum had come prepared though with a chair – at first I was avoiding sitting in it – I didn’t want to feel like I was lording over everyone as I enjoyed merging into the conversations happening around me than sticking out like a sore thumb. In the end though I did have to sit in the chair a couple of times to give me back, legs and bump a rest before I would sneak back in and enjoy the flurry of gossiping going on around me.

There were moments I would just sit back and enjoy seeing my friends talking away and develing into food. It turns out I am not a fan of being the center of attention so a baby shower all about food and talking was just right.

Despite being under the shade of a tree, I felt a tiny drip of rain on my arm and soon enough another – it had started to sprinkle a little bit of rain so quickly everyone packed up everything and started heading back to mine. It wasn’t bad though – there was a nap planned for me just after the picnic and I have always loved a little bit of rain. Food was put away in the fridge and on the table before I headed to go for a nap.

Now I mentioned family drama before and how I wanted to avoid it for any baby celebrations. My sister isn’t talking to my dad so my friend had ensured no one in my family other than my mum and sister knew about the baby shower. My dad though had joined Facebook a few weeks back so when my mum and sister tagged me in a post about the baby shower, it had turned up on his feed.

He of course responded with a rather rude and attention seeking message demanding why he had not been made aware of the event. For a week or so I have told him that my friend was visiting and had some baby celebrations planned – he did know, he just wasn’t aware that other family members had been invited and not him.

I got this message just before trying to get some sleep so of course I didn’t get much of a rest. This drama is exactly what I wanted to avoid. I did get some rest though so 3 hours after my friends and family had gone to explore the sea front, I got up and broke into tears on BF while he gave me some great advice – ignore it, this was my day and I should just enjoy it so any one who sends a message like that on the day was just vying for attention or drama.

Not long after BF cheered me up we started setting up the table with food as everyone was due to be back very soon. We laid out food, drinks and board games. Sure enough people returned with a flurry of gossip and talking – soon enough the thought of my dad’s message was out of my mind and I was enjoying myself again.

It turned out that everyone had gone down to the beach and had ciders or pitches of Pims, enjoying the brief bits of sun, showers and alcohol while I was able to get some rest. Everyone other than my mum and sister had come by train so had enjoyed having some booze and not feeling guilty about drinking around a pregnant lady. That didn’t stop me and BF offering them more when they got back!

BF hadn’t joined for the picnic so that it would just be ladies, the traditional audience of a baby shower but the final part was about both of us so he got to enjoy being surrounded by ladies congratulating him on his coming fatherhood. He was able to enjoy the vast selection of food and conversation.

After a few hours of food, drink and gossip, one of my friends had to leave due to the long journey back. After a choirs of goodbyes and hugs it was clear many others would need to leave in an hour or so – if we were going to play anything we needed to start soon.

It wasn’t a hard decision what we were going to play with some avid and non gamers there, it had to be cards against humanity. For everyone who had played it before in the room and knew about my innocent mind, this would lead to my guinea pig like giggling but it would also be a simple game everyone could enjoy.

My sister was the only one who opted out of playing- she was very open about how much she isn’t great a games. She hadn’t heard or played this game before so went from being very reserved to helping out my mum choose what cards to play and giggling away.

I really loved it and unsurprisingly for me BF won – he knows how to quickly cater to different people’s sense of humour. It was such an incredible game with laughter and joy filling my flat. For me it was an amazing end to the baby shower.

With the game finished and a 2 hour journey ahead for many people and my pregnancy nap not being too effective, it was time to call it a night. Just before people had to head to the station or their car, we managed to get a couple of group photos. I love photos – they are a great way to remember events, parties and gatherings.

It was shame we didn’t manage to take these earlier before my school friend had to leave, but it was still nice to have a number of photos to remember the day. Even now I am loving looking at those photos and remembering a fantastic day of pre-baby celebrations. These people gave me such a wonderful gift of wonderful memories that I will forever cherish – something I will always be thankful for.