All through my pregnancy I have not felt like I looked pregnancy. I started with a lot of squishy parts; I had a bump but it was made up of squash-able fat. For weeks neither me or BF could see a difference – to us I was still the same width. 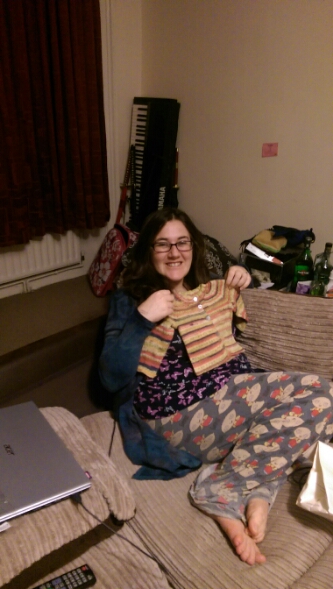 Since about 8 weeks I have been losing weight from struggling to eat enough food but my stomach stayed the same – little did we know that I was losing fat from my stomach. On top of this equilibrium between bump growing and fat loss, as we were seeing my shape everyday we didn’t realise that over time I had changed shape in a subtle way.

All of this time I had been either wearing big baggy t-shirts or maternity clothes – with my boobs having grown so fast early on I’d not been able to fit in my normal clothes for a while. It is surprising just how well maternity clothes are good at hiding a bump. This week my friend from school visited for the weekend – this was when it really hit me that I had a bump.

It was Saturday morning and rather than heading back to mine straight away we explored Brighton’s Vegfest. Nothing other than my food aversions or quick exhaustion came up until we left. On our way to Bravissamo, as there was one not in my friends city, I asked if I looked pregnant at all.

“If I didn’t know you no… but as I know you I can definitely see a difference.”

Turns out that I had a subtle bump even with the maternity top with a high bump rather than just spare tire. She felt really bad but for me it was a break through – I had a bump even if it was small!

At Bravissamo my friend searched for all the items that she wanted to try on. After finding some great things to try I grabbed a few too just so that I could go into the changing rooms with her and giggle. I also never get to go clothes shopping with friends so despite having a growing bump that was going to make any purchases pointless it was fun going in and enjoying dressing up.

With only three items to her eight I waited a few items before I tried anything on. The first top I tried despite being a 16 very curvy wouldn’t go over my boobs – oh well I knew they had gotten big. Next top went on and this time it was a light stripy jumper. Made from stretchy fabric this was actually got passed my boobs and down me. It was this point that I looked in the mirror and laughed – I had a bump and a very clear bump at that.

As I had struggled with the last top I had calls of “Did you get stuck and need me to help?” thinking it was another top that wasn’t going over my boobs only for me to tell her that I got it on and she’ll understand why I was laughing. With a call that she had another top on that she wanted an opinion on I opened the door to my changing room to a gasp.

I was very much pregnant and my clothes had been hiding it really well but this top showed off my real figure complete with very clear bump. As this had been a top that she had just tried on just before we had both seen what it should have looked like. There was no doubt now that I was out of the baby or burritos stage but my maternity clothes really hid that. It was that moment that I wondered when what I had thought was still just tubby old me was actually a baby bump – how long had I actually looked pregnant but hidden it from the world. 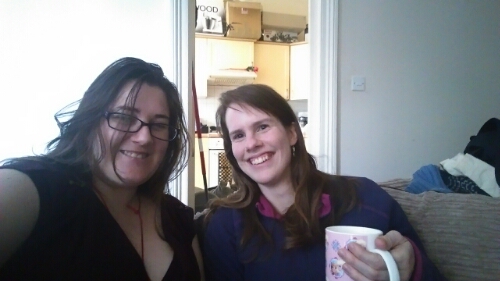 It is a crazy moment when you realise that you have a bump – there really is someone in there and soon it is going to be very obvious that you are pregnant to strangers. For a lot of women the emergence of their bump is worrying as they try to keep it a secret for as long as others, while for some it is a great moment that they can start to dress in a way that proudly shows it off. I could have bought that top and clearly shown off my bump to the world but for me this top was out of the question; the weather was starting to warm up and so even this light jump will be too warm to wear in a matter of weeks. It was fantastic though to see my bump and really feel pregnant especially with such a close friend present for that moment.

Finishing off our shopping trip we head back to mine to rest, eat and gossip for the evening. With such a big moment of feeling pregnant I had my next big moment when I got my first ever baby gift from my friend.

It turns out that my friend, since finding out about my pregnancy, had knitted the most adorable little baby jumper for me and my little one. As she, and I, didn’t know what the baby’s gender is she had kept it gender neutral so that no matter what I could use it.

I loved it! It was such a thoughtful, beautiful and wonderful gift that she had spent ages making especially by hand just for me. There was so much thought into it as she told me how she worked out what size the baby would probably be when the weather started to get cold so that the jumper should fit just right.

What an incredible week – not only do I officially have a bump but an incredible present from a close friend for my little one that I can imagine them in. It is weeks like this that make pregnancy great.

When did you realise that you had your bump? What was your first baby present? I’d love to hear from you about your pregnancy stories so leave a comment below!

This blog post was written March 2016 when I was 18 weeks pregnant and published in April 2016.

The first time round my bump didn’t really show properly until around five or six months but second time round it was much earlier – probably around 12 weeks! #effitfriday

Aww this is lovely. My bump in my first pregnancy didn’t really pop our until about 20 weeks. With this second baby I’ve been showing since about 8weeks!I love e the knitted jumper, what a sweet gift xx#picknmix

Ahhh what a lovely post! First time round my bump didn’t show until I was around 22 weeks, I’ve always struggled with my weight and carry it all around my middle so I didn’t look any different. On my second I had a bump straight away, it was very hard to hide! #effitfriday

Lovely post! I am a weird one, I didn’t get a bump with any of my five children. I was still in my regular clothes until the day I gave birth, although I did notice my boobs were bigger and I gained weight but not very much! We actually didn’t tell anyone I was pregnant with baby number 5, other than our parents and a handful of friends we decided not to bother and just announced it when he arrived, and nobody noticed!! #fridayfrolics

No one believed my nan was pregnant with her first baby that her weren’t going to give her the time off! Seems some people don’t show – I’m more of the whale sized type

I showed really early with my second. I remember the relief of not having to hide my tummy when we told everyone! Thanks for linking up to #fridayfrolics

My bump didn’t come in until I was about 25 weeks I think or so – I was dying for it to be on show as before that you just feel all squishy! I’d say next time round (if i’m lucky enough) it’ll come in quicker : ) #effitfriday

With my first son I didn’t show at all until about 20 weeks, my second son I had a bump from 10 weeks 🙂 Congrats on the bump, I almost miss mine over 10 years on 😉

Thanks for linking up to #PicknMix

Second time round I had a bump around 14 weeks, but then it didn’t really grow and was a teeny bump!!!! Then I got to 20 weeks and there was no denying it.